Historic Germantown is a partnership of 16 historic sites in northwest Philadelphia that works collaboratively to preserve historic assets, interpret them to the public and raise their visibility. The organization is headquartered at the Germantown Historical Society in a Colonial Revival building on Market Square. The building is organized around an interior courtyard that until recently was paved in asphalt. A charming cottage is situated at the rear of the courtyard. Behind the cottage and the courtyard wall is an asphalt parking lot. Because of its harsh and unsightly appearance, the courtyard has not been an asset to the organization.

In 2016 LDCP assisted Historic Germantown in devising a cost-effective plan to improve the appearance and utility of the courtyard and parking area. The plan was designed to meet the criteria of the Philadelphia Water Department’s Stormwater Incentives Management Program (SIMP), which provides grants directly to non-residential property owners who want to construct stormwater retrofit projects. Since funding for the project was to be mostly through this program, the project needed to be simple: the courtyard de-paved and planted, stormwater runoff from the surrounding buildings’ roofs directed into subsurface infiltration, and a portion of the parking area de-paved and transformed into a rain garden to take surface run-off.

Construction was completed in May 2017.  The project received the Philadelphia Water Department’s Stormwater Pioneers Award in 2018. 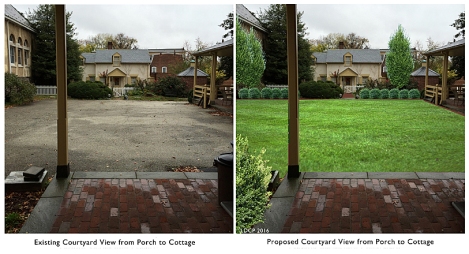 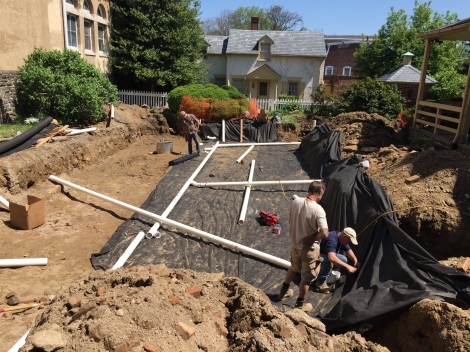 Installation of the subsurface infiltration in the courtyard, 2017